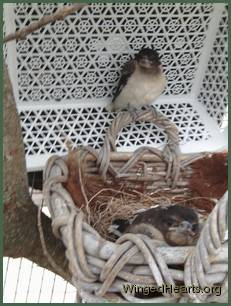 Pied-butcherbirds chicks are usually born in early December.  Peter Gregory rescued a pair of chicks and had to work hard to rescue them, but found it was well worth the rewards of his Christmas gift. Here's his story.

We’ve been feeding a couple of birds who had a nest and chicks up a gum tree about 500 metres away.  We noticed a bloke climbing up the tree with a chainsaw about a week ago and when we investigated we found that the tree was being brought down as it had a lot of dead limbs which were dropping and nearly hitting kids going to school.  We got the birds and the nest before it was dropped and brought the babies home.  Luckily enough the parents followed us home and so the babies have been relocated into a medium size Neem Tree in the back yard.  They are slowly but surely getting bigger and the parents seem to know that we mean them no harm.  The babies are brought inside in a cats carrying cage each night as there are cats around and one nearly got up the tree one night and every morning I return them to the cane carry tray which holds the remains of the nest.  I’ve enclosed a couple of photos of the babies and one of an angry-looking mum.  The plastic tray at the back was put up behind the nest as it blocks the prevailing north east winds and storms.  I hope that once they start flying they will stay in the area so we can watch what happens next breeding season. 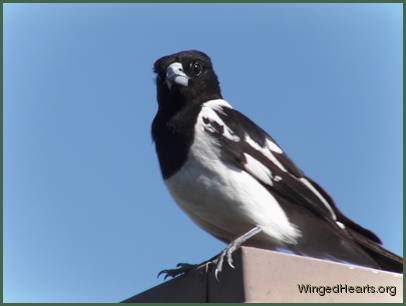 The Butcher Birds we saved are very close to being able to fly and I was wondering if you could tell me how to teach them to fly.  They make some leaps of faith out of the small tree they are in but they are really just making a controlled crash.  Is there anything I can do to assist them to fly?

(Mummy butcherbird on the right reminds me of our Butchie - slide 5 in the link here.)

I’ve attached the latest photo.  At the moment the flying is not going too well but they’re trying.  Is there any way to tell the males and females apart at this stage?  One is very slightly bigger than the other.  The smaller one seems to have settled in a bit more and appears to be more intelligent – does this mean that it’s a male….LOL 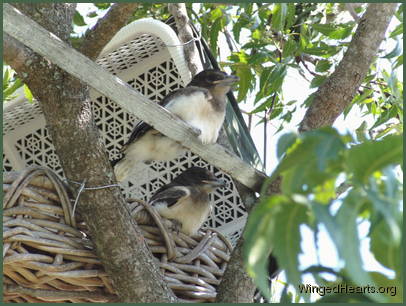 I talk to them and they seem to listen but the bigger bird doesn’t take much notice when I tell it to stop flying (jumping) into next door’s yard – it really goes crook at me when I take it back to the tree.  The parents come around when it goes off but they seem to know that I mean them no harm.  I’ll be glad when they can really fly and get themselves out of danger as I’ve not worked as hard as raising these chicks as I did with my own daughter – she loves them by the way.  She’s got a soft spot for animals and wanted to be a vet but couldn’t put up with them being hurt in any way.  She’s seen people really messed up in accidents and that didn’t bother her too much as she was busy assisting me administering first aid and cleaning up blood and gore but as soon as an animal gets hurts she loses it.  The babies can really be a handful so it will be good when I don’t have to get up at 4 in the morning to take them back to their tree.  I have to bring them in at night as there are a lot of cats around the area.  My dog usually puts them out but during the day the parents will chase him away even if he is getting rid of a cat.  They are slowly getting used to both the cat and dog and will feed off the table even when the cat is underneath it.  Maybe the animals could teach us a few lessons about live and let live – having done two tours in that is a policy I can handle.  There’s a storm about to hit so I’d better check on them – what’s the going rate for being a nursemaid???

Attached is a photo of the babies first time on the ground taken about 2 weeks ago. 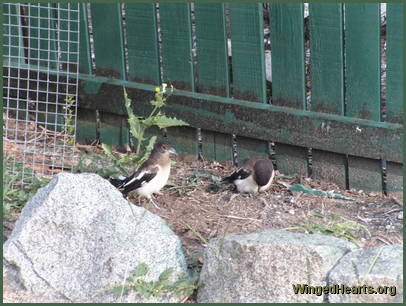 These two seemed to take a lot longer to fly than what I have read about on the net.  Maybe they were being too spoilt.  They finally left home today and have taken up residence in a huge tree down the road a bit.  The parents still come back for feed and so hopefully they’ll all be back again next season.

It has been a very worthwhile effort raising them but I must admit that I’ll be glad that I don’t have to get up at 4:15 each morning to put them back in their tree after having them inside away from the cats each night.

Thank you Peter for sharing your story and pictures - Gitie and Ron.