Lessons From A Chance Rescue - About Babblers, Magpies and more

When Ron rescued a small bird running desperately for its life from a crow, little did he know how much joy and learning the day would bring.  The full story is in our blog A Lucky Rescue Makes A Happy Family and in the pictures below.

We didn't know that the bird was a baby till much later at the vets.  What struck us was how comfortable he looked in Ron's clasp, happy to no longer have to try and escape from the crow.  The bird did not look worried at being caught by a human. I guess, he could feel the warmth and gentleness of the hand that held him and didn't want to leave its safety.  What he needed was good rest and when he awoke after a couple of hours, he was weak but happy to be given a drink with multivitamins. He (or she) showed no signs of being afraid of me.  At the vets a few hours later, he perked up and showed them that he was well and full of spark. The little fellow was obviously exhausted from the ordeal with the crow and had needed complete rest.

The magpies must have seen Ron pick up the babe in the morning and recognised him in the evening. Nothing else explains why they all came over from way off just to tell us off.  But when they saw us place the baby in the grass they relaxed and left with only one keeping a quiet eye on us from a distance.

At this stage we still thought the baby was a scrub wren. When the baby started to call, his voice was soft and barely audible.  When the babblers flew in and responded to the call, we recognised the similarities from the pattern on the babe's head.  The call must have been unique to the species and recognisable to the family because no other birds came to check it out.

The joy and excitement with which the parents greeted their lost child was the finest reward ever.  The older siblings hastened to catch bugs and feed the little one, while the parents headed to the top of tree, where the magpie on sentry duty had been keeping watch.  They explained something in soft tones before the magpie, satisfied with their response, returned to join his friends leaving the parents to catch bugs.

The magpies are like the 'supervisors of the bush', Professor Gisela Kaplan describes in her book 'Magpies'. They keep tabs on who's in, who's out, who's not meant to be there and who's not following the rules.  Their reaction to us and the babblers response to them certainly bears this out.  The babblers seem to have strong relationship with the magpies as we have seen before.

The delight and anticipation with which the family hung about and watched when Ron lifted the babe out of the box and placed him on the grass showed that they understood that he was not the predator, but had rather looked after their darling and brought it back.  Normally the birds would not have even approached a tree within proximity of any human.

The speed with which they all found bugs in the grass and in the folds of bark was quite amazing to watch. They had a sense that the babe had not eaten for hours and needed to be fed properly straightaway.

I find it quite amazing that a baby chick that had not yet fledged could be so determined to escape from the claws of death that it would run for its life, and also be able to sense safety and love in the hands of a human and even in an alien environment.

And nothing can take the place of finding one's family member is safe and well.

(click on the 'next' button to forward through the slides).
Previous Slide 1/7 NextBaby BabblerWhere am I? 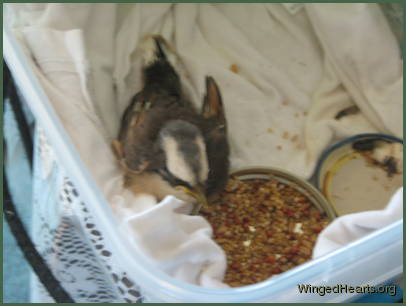 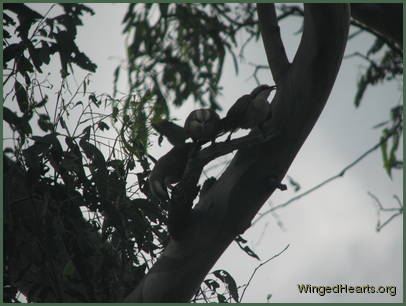 It's ours and needs a big feed 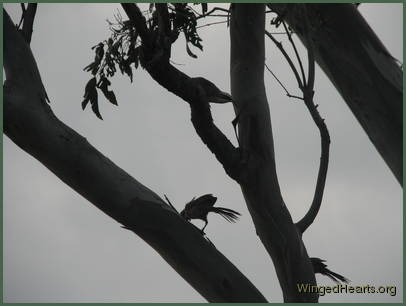 Baby BabblerNo worries - there are plenty of bugs around 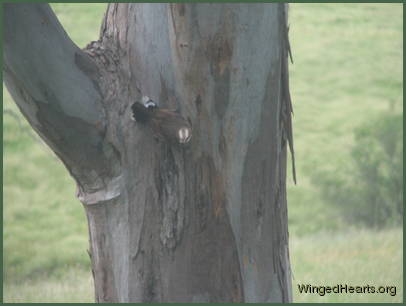 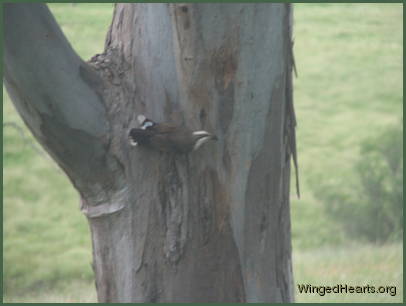 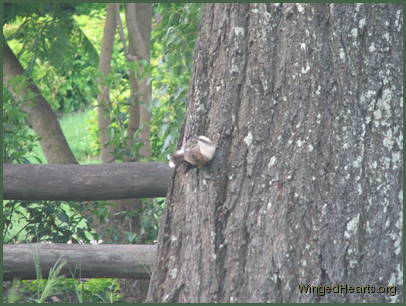